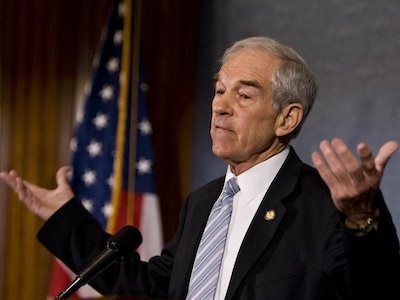 The Harris Center presents An Evening with Ron Paul

Dr. Ron Paul ran for President of the U.S. three times—as the Libertarian Party candidate in 1988 and the Republican Party candidate in 2008 and 2012. Serving in Congress during the 1970-80s, he served on the House Banking Committee, where he was an outspoken critic of the Federal Reserve’s inflationary measures. An unwavering advocate of pro-life and pro-family values, he voluntarily relinquished his House seat in 1984 and returned to his medical practice. He returned to Congress in 1997, serving on the House Financial Services and Foreign Affairs Committees. He is the author of several best-selling books, most recently Swords Into Plowshares, a personal reflection on America’s history of war, foreign intervention, and prospects for peace.

The Harris Center at Folsom Lake College is a $50 million facility that opened in 2011. Tickets are available online at www.harriscenter.net or from Harris Center Ticket Office at 916-608-6888 from 12 noon to 6 pm, Monday through Saturday, and two hours before show time. Parking is included in the price of the ticket. Harris Center is located on the west side of Folsom Lake College campus in Folsom, CA, facing East Bidwell Street.

This site uses Akismet to reduce spam. Learn how your comment data is processed.

There are no upcoming events.